Posted on February 10, 2020 by amandagiorgis

Newspapers were very popular in New Zealand in the late 1800s.  It was a way to keep up to date with news from the homelands (albeit 3 months old by the time it reached our shores), and for more local information and advertising to be distributed to remote parts of the country. To start with, articles were just set into type in the order they were received, so you may find adverts next to death notices next to news from Britain!

Printing was a fairly easy, if laborious task, and if no printing press was available, a laundry mangle did the trick! Most communities had their own local ‘rag’, and some towns, like Nelson, had several competing with each other. The new daily papers like the Otago Daily Times which were printed in the main cities also produced a weekly summary that could be transported into the ‘back blocks’.

Marytown would likely have had some kind of broadsheet almost as soon as it became a community, and you would expect it to be Betsy Franks who produced it. After all, she had her finger on the pulse of the community as people called into her little village store each day.

So here is the first edition of the Marytown Messenger. I hope it gives you a taste of life in our small fictional community in the early 1850s, but if you would like to find out more, you can buy my books here 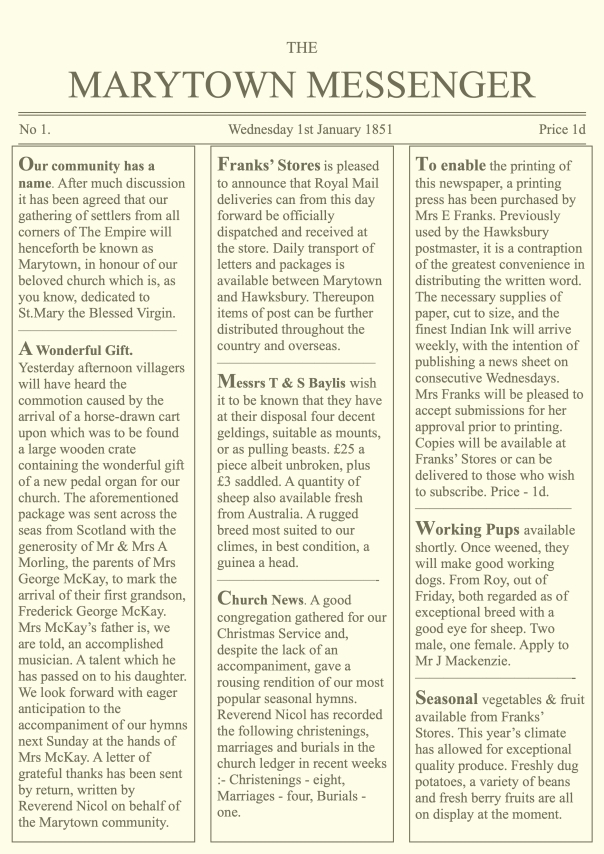 ← Waitangi Day
Nothing to do with anything but…… →