Between Gallagher and Gnanalingam

‘The Wideawake Hat’ is now available from Scorpio Books. Here are some details about this amazing independent bookshop in the new BNZ Centre, just off  Cathedral Square in Christchurch :-

“Established 40 years ago, Scorpio Books is a Christchurch institution. It is the best place to go to browse and buy books in Christchurch, or if you get stuck, we encourage you to come ask our knowledgeable staff for a recommendation.
We have an extensive range of books covering a variety of genres, and if you can’t find it on our shelves, we’ll be more than happy to source it for you if it is still in print. We invite you to sink into one of the old-fashioned leather chairs placed around our shop as you browse.
We also have an online store, and offer free shipping within New Zealand for online orders.”

So you will find ‘The Wideawake Hat’ on the NZ fiction shelf, in strict alphabetical order, between ‘Inangahua Gold’ by Kathleen Gallagher and the intriguingly named ‘A Briefcase, Two Pies and a Penthouse’ by Brannavan Gnanalingam.

To be honest, I would be tempted to buy all three……..! 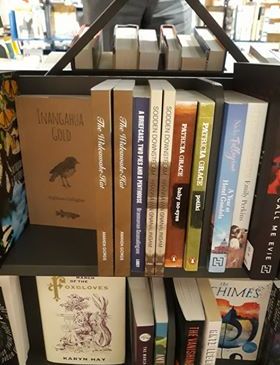 With thanks to Mark Harris for the photos.

The Transitional Cathedral in Christchurch is an iconic building and well worth a visit if you are in the city. It is hard to spot the cardboard that was used to build it, but it has an atmosphere of calm and beauty that is quite inspirational. It may have been built as a temporary replacement for the cathedral in the square after the 2011 earthquake destroyed that building, but it doesn’t feel temporary at all, and it has fast become a tourist destination in its own right and a venue, not only for worship, but for concerts and events of all sorts.

I recommend purchasing two things from the cathedral shop. Buy yourself a Bartholomew Bear, and you will also find The Wideawake Hat for sale there too. 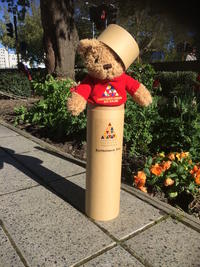 Posted on March 7, 2019 by amandagiorgis

At 7:18pm on 7th March 2018 I sent an email to my friend Heather. It was the first time I had come clean with anyone that I was writing a book. Did I know then what I had let myself in for? Probably not.

And it is odd to look back and see how much has changed. At the start of it all, my heroine was called Elizabeth (I changed it to Sophia because I kept typing Elizabeth wrong), and our hero was Angus (George is so much better!).

In my notes I had written, ‘Angus dies (illness or accident?)’. Well we know now that George drowned, leaving room for James to enter the story. Rather surprisingly the rest of the story remained much the same over the next few months, as it left my head and entered the laptop.

And Heather became my sounding board, my editor and my proof reader without whom I doubt I would have completed and published ‘The Wideawake Hat’. On that day Heather suggested we needed the film and TV rights, even Netflix – that hasn’t happened yet, but you never know when the call may come through!

To celebrate the completion of my first year as a proper author, I give you small taste of Book 2 in the Applecross Saga called ‘Shepherd’s Delight’  – due for publication in mid 2019.

For those of you who care to work it out, you could connect the photo above with the start of book 2, and the choice of title – 3rd September 1859. Go on – google it!

“Red sky at night, shepherd’s delight, red sky in the morning, shepherd’s warning,” Sophia chanted the words in time to the bouncing of baby John James on her knee. The child looked back at her mother as if he understood every word, a wee bubble bursting on his lips as he digested his latest feed of milk.

But what, Sophia wondered, did shepherds do when the sky stayed red all day and night? “

Posted on February 15, 2019 by amandagiorgis

Writers love libraries. Where else can you browse shelves of lovely books to your heart’s content, sit quietly in a comfy chair and read whatever you want, ask questions which lovely librarians are only too happy to answer?

So I was very pleased indeed to have a request recently for some copies of The Wideawake Hat for Timaru District Library. Apart from some copies for people to borrow in the normal way from Timaru, Geraldine or Temuka libraries, a copy has been placed in the Aoraki Reference section (for books by local authors) and two copies in the Aoraki Stack – an archive of local publications. It is a very special feeling to have produced something which will be kept for posterity.

I was recently asked for an interview by a guy called Wayne Turmel, a Canadian living in Las Vegas. He writes historical fiction too, and blogs about the genre.

Wayne has just published his latest book too, part 2 of the Lucca Le Pou stories, set in the time of the Crusades,  Acre’s Orphans

So why not ride out the heatwave in Australia or New Zealand by downloading a couple of ripping good e-books. Relax next to the fan with a cold drink within reach, keep cool and read, read, read?

Or, for those of you in the Northern Hemisphere winter, cuddle up on the sofa with a blanket and a steaming mug of hot chocolate, keep warm and read, read, read!

Posted on January 6, 2019 by amandagiorgis

A little bit of publicity in the Timaru Herald after the book launch.

Christmas in the Mackenzie 1858

Posted on December 24, 2018 by amandagiorgis

Freddie, Edmund and Benjamin had been reluctant to perform in front of their families for Christmas Day, but Clara Nicol was a strict teacher to the three boys and insisted that they learned their lines by heart.

Now eight years old it had been a case of muttering the words to themselves over and over, a line at a time, until they could say it all at once. At least it was a bit more interesting than the bible passages that Mrs Nicol usually gave them to learn. It didn’t matter that the words made little sense to them, it was just a case of learning by rote.

Freddie thought it was unfair that the girls, all of whom were younger, just had to do a dance while his mother played the old wooden piano which had been bought second-hand from a furniture dealer in Oamaru. His mother played beautifully, well at least Freddie thought so. He loved to listen to the music she played, especially if she sang along. Lately she had been playing their favourite Christmas carols in order to practice for the church service on Christmas morning. Why was it so much easier to remember the words to those carols than it was for some poem?

But he had better concentrate now. Standing upright in his Sunday best, with Ben and Ed either side of him, all full to the brim with a dinner of roast lamb and potatoes and a huge piece of steamed plum pudding, they would much have preferred to lie down and sleep. Especially as the sun streamed through the window into the parlour where everyone had gathered after their huge feast.

The three boys, growing so tall and strong, brown as berries, began together, almost in unison :-

Let every man be jolly,

Now all our neighbour’s chimneys smoke,

And Christmas blocks are burning;

Their ovens they with bak’t meats choke,

And all their spits are turning.

Without the door let sorrow lie,

We’ll bury it in a Christmas pye,

And evermore be merry.’

Their mothers listened in enrapt silence, Sophia wiping a tear from the corner of her eye. How proud she was of her son, and how much was he beginning to look like his father, George, these days?

Nancy, bouncing Adey Rose on her knee in time to the rhythm of the words, broke into a cheer at the end of the poem.

James, Edmund and Samuel raised their ale-filled mugs in a toast to their families and a thank-you to Job and Clara Nicol who had joined them once their church duties were done.

The boys, reluctant to stand still more than was absolutely necessary, reached the last word of the last line and broke free, loosening their collars as they ran outside. The girls followed giggling to each other. And the grown ups were left to take another mug of ale and cut the madeira cake.